For more details about the polling results, click here.

Consult this handy guide to find out what’s at stake for CUPE members across Manitoba and in your sector. The guide also includes suggestions for questions to ask candidates in the lead-up to the April 19 election. Contact CUPE-MB to order paper copies. 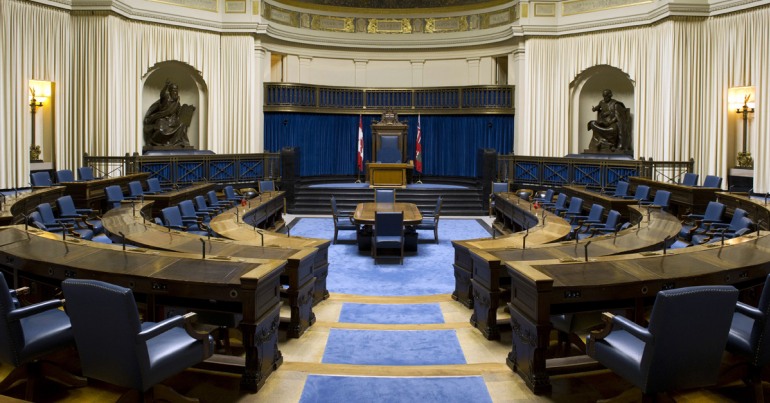 Today the Premier of Manitoba officially dropped the writ, beginning a month-long election that will determine the next government of Manitoba on April 19.

But what does this election mean for CUPE members?

The Conservatives and Liberals want to cut jobs, privatize services, and reverse the gains we have made as workers under the NDP.

While election platforms will be rolled out throughout the campaign, we have already seen overtures made by the Conservatives and Liberals that will affect our members.

This is a brief overview of what’s at stake for CUPE members in Manitoba:

The Liberals have announced that they too will find millions in “savings”, but haven’t yet said where they will cut. Liberal governments in other provinces have pushed school support staff on strike with layoffs and funding cuts.

In fact, the last time the Pallister Conservatives were in power in Manitoba, they cut millions of funding to social service agencies, including many where CUPE members work today.In other provinces, Liberal governments have cut social services to the core.

In Saskatchewan and Alberta conservative governments have privatized laundry services and cut jobs. The Alberta Conservatives even wanted to introduce fees for health care services. Albertans had enough, and voted in an NDP government.

In Ontario and BC, Liberal governments have found “savings” off the backs of workers. In BC, laundry services have been contracted out resulting in job cuts and pay cuts. Liberals in Manitoba would surely follow that lead.

Conservatives will also make sure that new infrastructure is owned and operated by private companies (through P3s), rather than municipal governments.

That means there will be less “need” for public sector workers like you, and it will likely result in downsizing and contracting out.Liberal governments have also promoted the use of P3s., especially in Ontario and the east coast.

The Ontario Liberals have been major advocates of P3s despite their Auditor General pointing out that P3s have cost Ontarians $8 billion more than traditional, government managed projects.

Liberal governments in Quebec have interfered in municipal bargaining, resulting in major labour action in municipalities across the province due to cuts, contracting out, and attacks on pensions.

The choice for CUPE members is clear:

At the most recent CUPE Manitoba Convention, members from across the province voted to endorse the NDP. If you take a look at the track record of the NDP in Manitoba over the years, it is clear they are prepared to work hard for workers in our province.

The NDP hold the firm belief that investing in social services means investing in the community and protecting those who need it most. From supports for mental health to supporting the Truth and Reconciliation Commission recommendations: the Manitoba NDP support social service programs and jobs.

The Manitoba NDP has also consistently funded infrastructure, provided supports to municipalities across the province for things like arena maintenance, community programs, and parks.

April 19 is an important day for CUPE members to get out and vote. But you can do more!

CUPE members are encouraged to volunteer in local NDP campaigns, and help re-elect Manitoba’s worker-friendly government. Talk to workers from other provinces about the challenges they’ve faced under Liberal and Conservative governments.

The stakes have never been higher, and now is the time to take action.

For more information on the provincial election, visit cupe.mb.ca/category/manitoba-provincial-election.

The province’s Economic and Fiscal Outlook tabled in the Manitoba Legislature today offers a more progressive way of ensuring that the wealthy pay their fair share. With the implementation of a new tax bracket that would see Manitoba’s highest earners provide slightly more in income taxes, the province is able to expand tax credits and supports for lower income earners.

“The 98% of Manitobans who don’t earn over $170,000 per year expect the government to help build a more level playing field,” said Kelly Moist, President of CUPE Manitoba. “Ensuring that the wealthy pay their fair share is good for working families”.

The fiscal outlook is an excellent tool for Manitobans to understand the nature of government budgeting, as well as a current look into the state of the Manitoba economy.

“While the Progressive Conservatives used much of today in an attempt to filibuster the government’s update, we are pleased that it was ultimately tabled for Manitobans to view,” said Moist. “The PCs have yet to offer Manitobans anything of substance themselves, and instead turn to parliamentary tactics to stall valuable discussion”.

The Manitoba Government is also committed to continued funding to health and education, and expanding childcare, ensuring that the province builds stronger public services for Manitobans.

“Other provinces are opting to cut funding to schools and hospitals, while Manitoba chooses to invest,” said Moist. “Manitobans should be proud that this government continues to fund the services we all rely on”.

“We’re pleased that we have been able to reach a new deal that addresses the recent merger and discrepancies between workers in Liquor and Lotteries” said Elizabeth Carlyle, CUPE National Representative. “The new contract better reflects the needs of all employees, and leaves space for continued conversations on bringing everyone on par.”

“The bargaining committee worked tirelessly to achieve the best collective agreement possible,” said Carlyle. “We’re proud that this deal was achieved through meaningful dialogue between the employer and the union and we feel all parties have come out stronger”.