“We are very concerned that we are losing our Emergency Room and other important departments that serve the community,” says Ric McAlpine, President of CUPE Local 1973 representing health care support staff at Concordia Hospital. 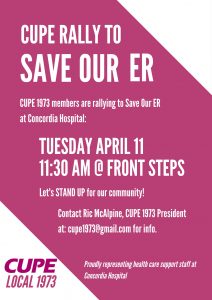 “We haven’t seen any evidence that moving programs out of the community will benefit the health of people in this area”.

On Friday, April 7 the WRHA announced sweeping changes to Winnipeg’s health care system, including the closure of three Emergency Rooms and relocation of numerous other departments.

“Judging by the response from front-line staff and the community, the closure of the Concordia ER is simply not acceptable,” said McAlpine.

A petition being circulated online garnered over 1,300 signatures in a matter of days, and opposition to the closures is growing.

“Today’s rally is to highlight the fact that front-line health care workers stand with the public in our opposition the closure of the Concordia ER,” concluded McAlpine.

“We know that the community values the programs and departments offered by our hospital and the other community hospitals, and the provincial government needs to protect these important services.”
For more information contact: David Jacks, CUPE Communications