CUPE members were out en-force on July 6, protesting the Manitoba government’s cuts to health care. 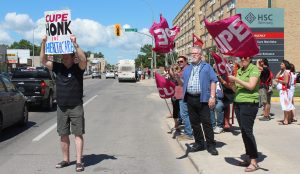 With Emergency Rooms and Urgent Care Centres closed, new long-term care facilities canceled, the cancellation of the new CancerCare building, and other hospital programs being cut and shuffled around, a bigger burden will be placed on HSC with no sign of new resources.

“The government’s cavalier plans for health care have been confusing, chaotic, and have deeply hurt staff morale”, said CUPE 1550. “How can HSC handle major increases in patient flow? How can health care workers do their jobs when the government keeps making cuts and systemic changes?”

Pickets were held from 7:15am – 9am, 11am – 1pm, and 3pm – 5pm throughout the day to facilitated shift changes so members could join the picket line. Local media noted the significant support from members of the community driving by.

Recent polling found that the majority of Manitobans are opposed to the governments closure of Emergency Rooms and Urgent Care Centres. CUPE and other unions have held numerous rallies against cuts, including outside the Concordia Hospital, Seven Oaks General Hospital, Victoria Hospital, Misericordia Hospital, at the Manitoba Legislature, and in Flin Flon.

“Our pickets today are to keep the pressure on the government by continuing to raise awareness against the cuts”, said CUPE 1550. 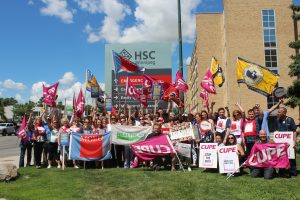