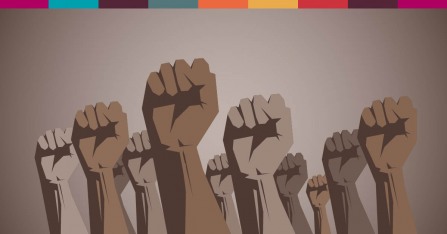 CUPE Manitoba is proud to celebrate Black History month to recognize the important past and present contributions of Black people and people of African descent.

“Every year we try to increase awareness about Black history,” said CUPE Manitoba President Gord Delbridge. “While we celebrate for the month of February, we must also acknowledge that the struggle for justice and equality must continue all year long.”

Black History Month began in the United States as “Negro History Week” in February 1926, through the work of African American scholar Dr. Carter G. Woodson. In 1976, as part of the American bi-centennial celebrations, the week was expanded to become National Black History month.

In Canada, official recognition first came in the early 1950s when the Canadian Negro Women’s Association successfully petitioned Toronto City Council to acknowledge the week. In the 1970s, the Council, after lobbying by the newly formed Ontario Black History Society, declared that henceforth February would be known as Black History Month.

In 1995 the House of Commons officially recognized February as Black History Month because of a motion made by the Honourable Jean Augustine, the first Black Canadian elected to Parliament. In 2008 the first Black man appointed to the Canadian Senate introduced the motion to “Recognize Contributions of Black Canadians and February as Black History.

As we celebrate Black History Month, CUPE Manitoba is proud to acknowledge the role and contributions that Black trade union members and activists have played in shaping Canada and our union.

So this February, learn more about your country. Learn more about the people who have worked tirelessly for justice, equality and recognition. Celebrate and honour the victories in human rights gains. Recognize that inequalities still exist and commit to continuing to learn and work towards a just society, where every person is treated with dignity, honour and respect.

CUPE Manitoba encourages all members to participate in the important events being held in our communities across the province.