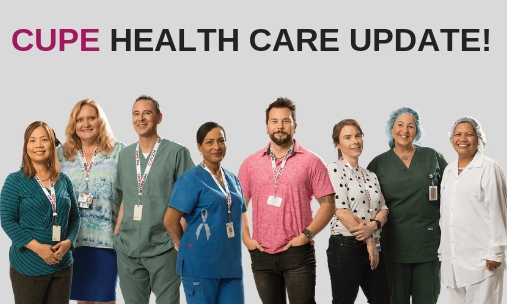 All health care workers are now members of their new union.

CUPE now represents all Community and Facility Support workers in these health authorities.

We want to thank all unions involved in this process and are pleased to say all unions have been working together to ensure a smooth transition of new members.

The Commissioner responsible for implementing The Health Sector Bargaining Unit Review Act  has issued interim bargaining certificates, effective as of December 8th (rural RHAs) and December 13th (WRHA and Shared Health), certifying CUPE as your union. He will eventually issue permanent certificates, and the interim ones are valid until that time.

With 36,000 members in Manitoba and 700,000 across the country, CUPE is now the largest union in Manitoba and Canada. We want to live up to the trust you have placed in CUPE.

Please watch for local stewards and representatives in your workplace in the new year, for more health care news, and for information about the bargaining process.

CUPE is also working hard to get to the bargaining table.  We want to negotiate a new collective agreement for you.

CUPE now represents you if you are a Facility Support or Community Support worker employed in these health authorities:

How can I find out more about CUPE?

Note to new CUPE members:
CUPE’s structure may be different from other unions.

Here are the basics:

CUPE is a member-driven union, where members are involved directly in decision-making. We believe you know what’s best for your workplace. That’s why your CUPE local is so important.

Shop Stewards, site Vice-Presidents, and your Executive are elected by you, the members, and can be contacted to help with your day-to day needs.

Shop Stewards, along with Union Support Officers, and professional National Servicing Representatives are there to help you when you need union representation at work.

National Servicing Representatives and Specialists (like Legal, Research, Human Rights, Union Development, Safety and Health, Pensions, and Communications) are all available to your CUPE local to help take on arbitrations, human rights issues, and fights against privatization and contracting out.

CUPE National and CUPE Manitoba are also here to support you, and your unique workplace needs.

CUPE’s education department provides training to local Shop Stewards and activists to make sure you have representatives right in your workplace who are equipped with the knowledge and experience to seek information and speak up in meetings with management.

If you were an activist, Shop Steward, or Executive Member in your previous union, please don’t hesitate to contact us about getting involved with CUPE.

When can bargaining begin?

CUPE’s contracts are the best in health care! CUPE ensures that every member can make suggestions on how to improve their collective agreement.

To prepare for bargaining:

Then bargaining can begin, using the designated receiving agreement as a base.

What can I do?

Shannon McAteer, CUPE Health Care Coordinator, may be reached at: