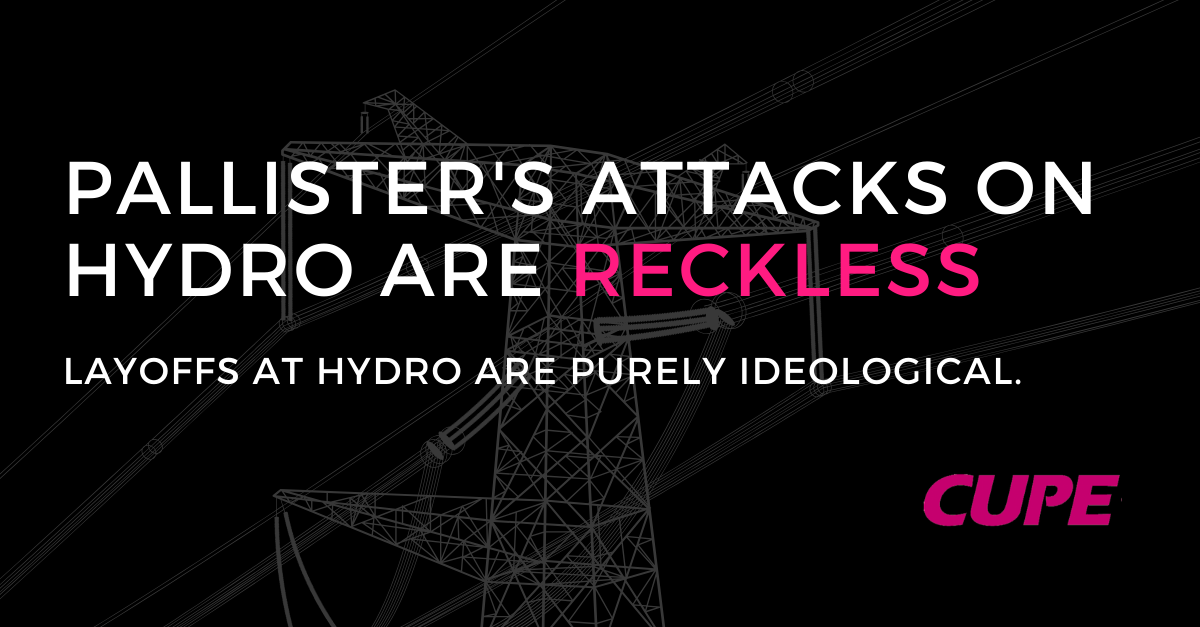 WINNIPEG – Unions representing Manitoba Hydro workers across the province are outraged that the Premier is putting the safety and reliability of public energy at risk by forcing mass, unjustified job cuts.

AMHSSE, CUPE, IBEW and Unifor have been in talks with Manitoba Hydro. Government demanded huge cuts from public bodies, and Hydro plans to move ahead with up to 700 layoffs to meet the target. The Unions are warning Premier Pallister that this is no time to cut essential services and frontline workers.

“This is reckless. Manitoba Hydro is an essential public service that is operating at full capacity throughout this pandemic,” said Michelle Bergen, President of CUPE Local 998. “Pallister has had his eyes on our public Hydro since he was elected in 2016. Pallister’s cuts are not to support the fight against COVID-19, they are purely political. This will be devastating.”

Added Terry Dunlop, President of AMHSSE: “The government’s demand for cuts at Hydro has been relentless. The government is supposed to be supporting frontline workers and Manitobans. These job cuts hurt, not help.”

The Unions learned that Hydro found temporary savings in other areas and would have been able to deliver nearly all the demanded savings over fours months – but Pallister insisted on deep job cuts. Unions proposed a work share plan, but Hydro claimed it would not be eligible. Unions learned that Hydro included vacancy management (leaving vacant positions unfilled) measures in their cost-cutting plan, but even that was not enough for government. Hydro told unions today that they would be laying off 11-13% of the workforce, or 600-700 people.

“It’s time for us to stand up for safe, reliable public energy,” said Mike Espenell, Business Manager of the International Brotherhood of Electrical Workers. “These mass job cuts will put Hydro in a dangerous position. We are working full-tilt and using safe practices during the pandemic. We are doing our part, coming to work every day. This pandemic could be a lot worse to handle if Manitobans in care, at home, at work and in industry have to wait longer for service because of Pallister’s reckless cuts.”

The Unions argue that job cuts and wage depression for frontline workers at the utility have left no room for more job cuts. In recent years, at the Premier’s behest, Hydro workers have already taken two years of flatlined wages, and the frontline workforce has been downsized.

Added Victor Diduch, Acting President of Unifor Local 681: “We have already been cut to the bone – Hydro’s annual payroll cost has been going down for four years. To meet Pallister’s demands to cut costs, we are getting into the danger zone. It makes no sense to hammer workers – all that does is compromise our public hydro and gas service, and take money away from families who are trying to get through this crisis. Pallister is clinging to an austerity agenda during the pandemic, against all evidence.”

For more information or to arrange an interview: