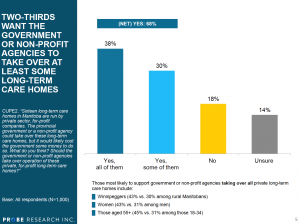 “Manitobans have seen first-hand the critical need for strong, public and non-profit care for our elders,” said Abe Araya, President of CUPE Manitoba. “The Manitoba government needs to phase out private for-profit care homes and invest in a strong public system.”

More than half of all COVID-19 related deaths in Manitoba have been in long-term care facilities, with many in privately operated care homes.

Ninety-four percent of Manitobans support regulations that would increase the minimum staffing levels at long-term care homes. Support for increased staffing levels runs across party lines, and finds support in both rural communities and Winnipeg.

“CUPE has been calling for increased staffing levels in long term care homes for years,” said Araya. “Manitobans understand the critical need to legislate minimum staffing levels so we can get our seniors the care and attention they deserve, now and post-COVID-19.” 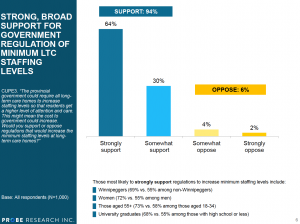 On May 27, 2020, NDP healthcare critic Uzoma Asagwara introduced a bill to legislate mandatory minimum staffing requirements for long term care homes, however the Pallister government used their majority to filibuster it, preventing it from being debated in the last legislative session.

“It is unfortunate that the government missed this chance to do the right thing for our seniors,” said Araya. “With such a wide range of Manitobans supporting legislation on minimum staffing levels, you would think the government would act.”

The poll ran between November 24 and December 4, 2020, surveying a random and representative sampling of 1,000 adults residing in Manitoba.