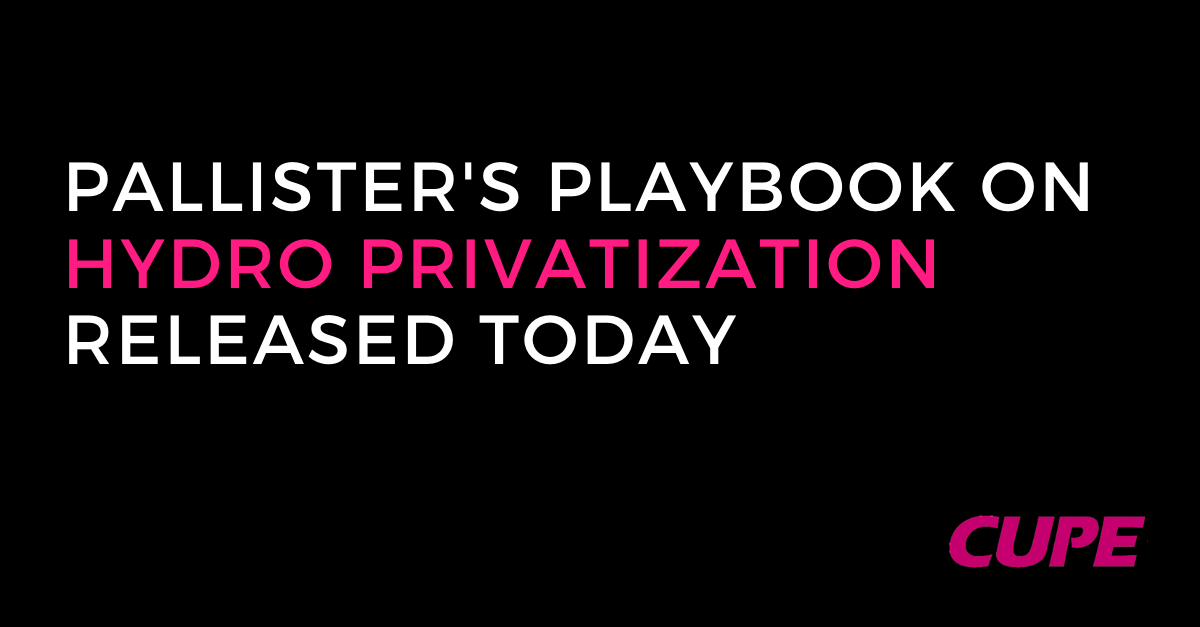 The release of the much anticipated “Wall Report” opens the door to new forms of privatization in Manitoba Hydro through the use of Private Public Partnerships (P3s), the sale of entire divisions of our provincialpublic utility, and the introduction of private companies to generate electricity in Manitoba, says CUPE 998.

“Pallister’s approach to privatizing Manitoba Hydro is about taking one slice at a time,” says Michelle Bergen, President of CUPE 998. “This government is carving off pieces of our Crown Corporation for sale, winding down subsidiaries, and now potentially introducing P3s to our hydro infrastructure and allowing private, for-profit generation of electricity.”

Wall’s report explicitly calls for the end of a fully public system by introducing private, for-profit companies to the market. For example, recommendation #2.1 in the report encourages the government to consider private sector access to hydro transmission to allow private companies to compete with Manitoba Hydro for export customers

P3s are a form of privatization, and it’s clear that the Wall Report recommends opening the door for privatization of Manitoba Hydro ‘by stealth’. “P3s are more expensive, reduce public oversight, and result in significant profits for the private sector at the public’s cost.

P3s are often promoted with the claim that the private sector takes on responsibility for risks previously assumed by the public. However, so-called risk transfer comes with a very high price tag.

“Private, for-profit corporations in P3s aren’t participating in projects for the public good, they are there to make a profit,” says Bergen. “At the end of the day no private company would ever take on risk associated with building hydro-electric dams in Northern Manitoba without the expectation of significant private profit, and Manitobans will be the ones paying for that profit with even less accountability.”

The previous NDP government enacted legislation that ensures thorough oversight, transparency, and accountability for any proposed P3 project in Manitoba. This was among the first laws that the Pallister government scrapped upon taking office in 2016.

In October 2019, the Pallister government commissioned former Saskatchewan Premier Brad Wall to take over as commissioner of a secretive inquiry into Manitoba Hydro’s Bipole III transmission and converter station project, and Keeyask Generating Station. The report was announced on Friday, February 26, 2021, and can be found here.