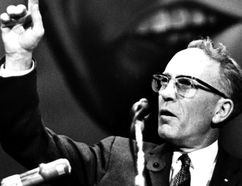 Many CUPE members often ask “why does CUPE support the NDP?”.

The answer is quite simple.

In 1956, tired of Conservative and Liberal rule, workers in the Canadian Labour Congress and the Co-operative Commonwealth Federation came together and asked “why isn’t there a party for working people?”

The NDP was created from those conversations in 1961 as a party for working people. This is why many unions across Canada support the NDP.

But to say we are simply a “supporter” of the NDP is insufficient – we were a founding partner of the NDP.

At the 2015 CUPE Manitoba Convention, workers from across the province once again pledged support to our party, the NDP.